The Calendar Castle is unique, spectacular … legendary! I was so happy when I got there that my feet were trembling with enthusiasm and anxiety! Thanks, PRO-TV for the tip! I got here due to the reportage you made on Saturday night. Did you know that due to you, on Sunday, the castle attracted more visitors than full weeks before?

Lot of thanks to the man who was guarding that day and who was so kind to let us go beyond the locked doors but also to tell us interesting stories with passion about this place, to guide us through the most hidden cloaks … to let us let us admire and imagine what once upon a time was happening here. His words have gone to our hearts, what a great man! It’s a great thing to see people so passionate about their work, great thing to see there are still people who appreciate history and who want to promote lovely places … treasures for our country.

You can find here lots of interesting things: Fashion Days

The love story that underpinned the building of this monument

Istvan Ugron, at that time the ambassador of Austria-Hungary in Russia, built at Zau de Campie in Mures County, Romania, a castle of the time, inspired by the French medieval castles. The construction began in 1911 and lasted 3 years. Based on the principles of a calendar, the castle has 365 windows, how many days has the year, 52 rooms, how many are weeks, 12 halls how many are the months, 7 terraces how many days a week and 4 towers, seasons. Sensational, right?

The love story underlying the Castle Calendar is also sensational. It is said that Istvan Ugron raised this castle for a Russian princess, one of the daughters of Nicholas II, The Emperror of Russia, whom he was in love with. In order to marry him, she would have asked the baron to pave the way to the entrance with gold coins, places in the crotch. The money was not enough and the work stopped halfway. The princess considered that Istvan Ugron was not rich enough for her and the story of the two ended here. Later, during the Russian Revolution in 1917, the princess and her whole family was killed.

During the communist period, the castle was taken over by the state and the furniture was transferred to Turda. The building was transformed into a sanatorium for TBC patients, school, grain storage and until 2012, here was an orphanage. During the period when it served as a placement center, it accommodated about 70 girls. Now walking inside, I found the rooms bearing flower names, the plates above the doors indicating the use of each room – tailoring, infirmary, archive room, kitchen, etc. The architecture of the building is spectacular both outdoors and indoors. The four towers, the terraces, the windows, the family blazon printed above the main entrance, the imposing doors, the magnificent stained glass and the imposing stairs are overwhelming.

The descendants claimed the forest and other hundreds of hectares in Zau de Campie, but the castle was won by the County Council of Mures. Fortunately, the authorities have started restoration work. I hope that this castle will regain the image of the past and the well-deserved place on the map of the important objectives in Romania.

How to get here? 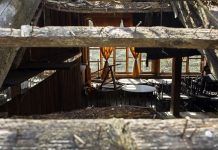 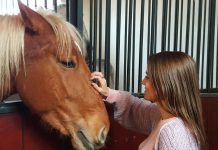